Awareness of science shops varies across Europe and between stakeholders

Awareness of science shops and community-based participatory research is much higher in Western Europe, than in other parts of Europe. Researchers are more likely to be familiar with these concepts than community organisations, the main beneficiaries, too. These are some of the results of a survey conducted by SciShops, a new Horizon 2020 project promoting the growth of science shops and community-based research in Europe.

Over 600 individuals from 34 countries responded to a web-based survey, conducted by SciShops to shed light on the awareness, experience and opinion about community-based participatory research in general, and science shops in particular. Respondents included community organisations, researchers and policy makers.

A vast majority of the respondents thinks that their organisation would benefit from community-based participatory research. However, there are some differences between the stakeholder groups and their perception of the main benefits of community-based participatory research. Researchers identify building trust and understanding between researchers and society as the main benefit. Finding solutions to societal problems is also something that researchers consider to be an important benefit. Community organisations and policy makers identified knowledge transfer between different stakeholders as one of the main benefits of this type of research.

“The survey shows that there is great potential for spreading the concept of science shops and community-based research. It clearly indicates that the work being undertaken in the SciShops project, which is aimed at creating new science shops all over Europe and strengthening the science shop ecosystem, is very important to reach a broader audience,” said Martin Bergman, a researcher at VA (Public & Science), who coordinated the survey.

The results also indicate that researchers have a different perspective and perhaps a more pessimistic view of the potential research has on the actual process of decision-making. The reasons for this can be many. The answers that research provides can be complex and policy makers often have to deal with conflicting results. Furthermore, research may often provide first-best solutions, which are not always possible to apply in a real-world environment, which might lead to a feeling of not being heard by politicians. However, the results of the survey suggest that this is not the case. Research results are a crucial part of the work undertaken by the respondents from the political sphere. This should be an encouraging result for researchers – for community-based participatory research and beyond.

The full analysis of the results of the survey is now available in the SciShops’ report Stakeholder survey summary report. 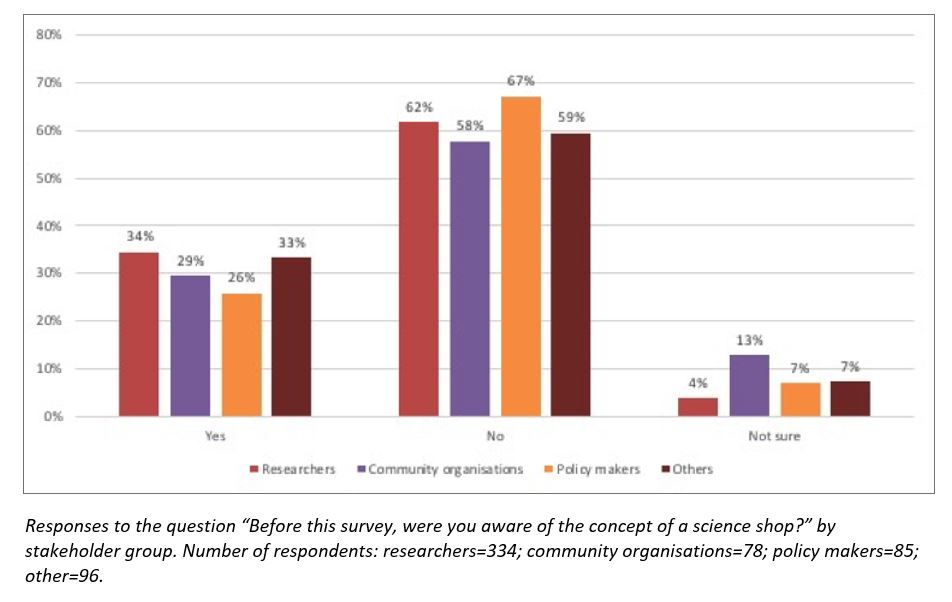